Microsoft is trimming prices of the enterprise and academic SKUs of Office 365 effective immediately.

Microsoft is cutting the prices of a number of its Office 365 enterprise and academic bundles, company officials announced on March 14.

The company is lowering, effective immediately, “most” of its Office 365 for enterprise plans by 20 percent, according to an Office 365 blog post. The changes are available for both new and renewing direct customers.

Here’s a chart, courtesy of one of Microsoft’s partners, that spells out the new pricing in a nice, understandable format. It looks like some prices were cut more than 20 percent; others were slightly less than 20 percent, based on this information: 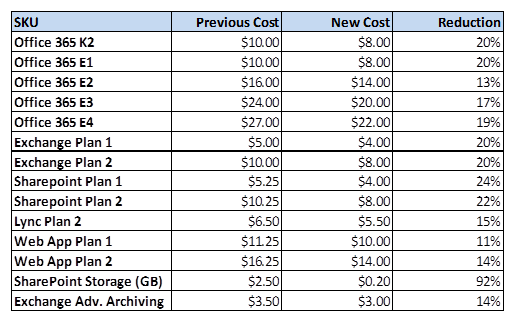 Microsoft officials are attributing the cuts to economies of scale and skills among its datacenters, developers and support personnel.

--> Please see the rest of the news on the blog : http://www.zdnet.com/blog/microsoft/microsoft-chops-office-365-enterprise-prices-by-20-percent/12173